Today I attended the service for my cousin Elmer Ray who passed away peacefully in his sleep Tuesday January 22nd. Elmer had Downs Syndrome and lived an incredible 63 years; the new upper age of life expectancy for someone with Downs Syndrome is about 60.

As I sat and listened to my Uncle Richard (my mom's brother and Elmer's first cousin) give the service I started to realize how much of an impact Elmer actually had on my life. I realized that, if he were never in my life, I may not be quite the person that I am.

I grew up with Elmer Ray, though he was 26 years older than I, because my mom, her sister (my Aunt Tootsie, though her real name is Charlotte) and my sister all worked at a boarding care home my entire growing up years until I was about 12. I remember always being there, especially in the summer, taking Elmer Ray and his friends outside for Ring-Around-The-Rosie, tea parties, picnics and trying to teach Elmer to say his ABC's and count on his fingers. I consider it a blessing that I had these women in my life that were the type of people to work in a place like that so that I could be around the differences of other people and learn from them.

Those experiences of my childhood conditioned me for a life of tolerance and compassion and that is the way I instinctively raised my son; to never judge someone based on appearances and to never be cruel to those 'different' from us, and I know this is how Tyler will continue to conduct himself in his life.

After the boarding care home closed Elmer went on to live in a small facility with just a few residents and staff in a house still right in town where he had his own room and roommate, all of his belongings and his freedom. He went to workshop and loved going to church. My sister has been his caretaker and Power of Attorney for many years and has always cared for Elmer Ray, bringing him to her home for every Thanksgiving, Christmas and Easter. As he got older, it was more difficult for him to walk and travel (and he was recently moved to the Nursing and Rehab center where my sister has been a devoted nurse for 20 years...let the spoiling continue!) but he still got his Christmas presents and treats. And boy, did he love to eat. And play in the water. I learned today that Aunt Tena would fill the sink and let him play in the water when he was small to keep him occupied while she got a few things done in the house, and all the way up to adulthood, you would have to keep an eye on him to bring him out of the bathroom before your water bill became sky high!

He had his very own personality, of course, and was a part of my family that I will always think fondly of. Elmer, unbeknownst to him, gifted me by merely being. I know that  I am so good with people at my job, especially "handicapped" people, because of him, he was so ego free and blessed with innocence. While I was listening to the service I had a joyous thought of what a glorious event it must have been for him to enter the realm of 'heaven' with that innocence and what a beautiful sight it must be for him, being so pure and untouched by the doubts of the mind that most of us carry.

How incredible it is to just realize how your actions, whether you know it or not, can touch so many. It should encourage you to think about treating others and yourself well and always striving to be your best.

My sister and I, in our lines of work, see people who get sick and are ill for a very long time and they linger on and on before they are finally able to let go and pass on to the next realm. I think I truly witnessed a small miracle with Elmer Ray that he was able to just close his eyes after being ill for a relatively short period of time due to complications of his syndrome and just pass away gently and peacefully in his sleep. I suppose it was because he didn't have the capacity or attachment to hold on as tightly as others because he was free of ego and he was able to just go.

It was amazing that he didn't have to linger on and suffer, he was able to just go peacefully, as if God released him from the confines of his sick body. He really did lead a very full life, the best he knew how. He was raised by his parents and when they passed, he was placed in a group home, not institutions, where he made friends with the other residents there, many of which came to see him today. He had many people who knew him and cared about him. He had a schoolmate from 40 years ago that came and told us very endearing stories about when they went to a special elementary school together, and the mischief they got into.

He had people around him who embraced him, and since he was born in the 1940's, I'm not sure if it was yet unheard of to institutionalize your children that were born with disabilities such as Downs syndrome, but he was raised by his parents in a 'regular' setting and was treated by family like a 'regular' kid.

I really learned today that I have an amazing family. Things I never knew. Things that I took for granted. I had always just thought "Well, of course Great Uncle Elmer and Great Aunt Tena raised him themselves. That's what I would have done."
But there are so many families, especially back then, that wouldn't have done, who would have just put children like Elmer Ray away somewhere where they could be cared for 'properly'.

Truly an amazing family. My Uncles (Mom's brothers and Elmer's cousins) grew up with him and played with him. I got to hear wonderful stories today due to Elmer's passing and we got to gather around and share stories about him and Grandma and Aunt Tena. It was a coming together and he made that happen. And for that I am grateful. 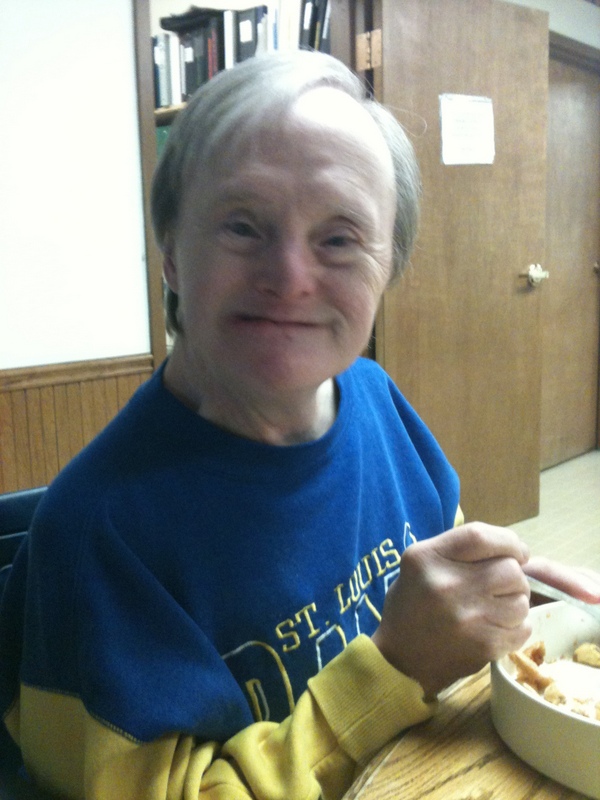